Dent de Broc. First mountain that beat me. Well, it was due to my own stupidity and maybe the fact that I’m Polish and when I see ‘ropes’ I think it’s a trail. It wasn’t. Believe me. I was near the summit when I decided to go down since it was too dangerous. More about it underneath…

Dent de Broc (1 829 m) lies on the range north of Vanil Noir in Swiss Prealps. It is an interesting mountain. There’s few different trails that will take you up to the summit.

I started in Broc (718 m) and walked towards the end of village direction Charmey. There you will find already signs that will lead you to a hiking trail. It’s steep. Walk through the forest already makes you sweat. Then you get on the road for a moment and then back on trail which is bloody steep again. When you get to Grosses Ciernes (1 300 m) you think you’re almost there. Spoiler: you’re not and yes it’s steep all the time. You can take a little break next to the chalet and continue. The views are breathtaking and you’re also lacking breath sometimes. Then there’s surprisingly steep descend where I almost got lost (didn’t look like a trail – but it is one). After that you start climbing again until you reach blue sign ‘Dent de Broc’ that indicates that is is an alpine hiking trail. 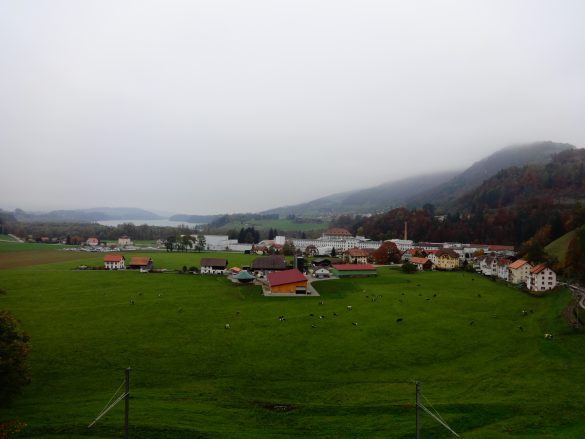 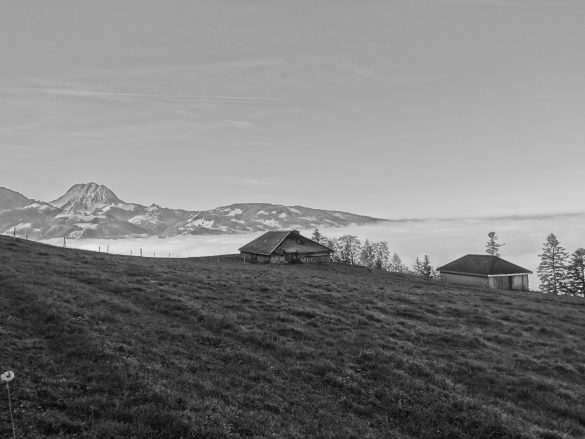 First time I went to Dent de Broc I reached the sign and just few minutes later I saw ropes and I thought that’s the way to go – it wasn’t. Climbing up the ropes wasn’t that bad but when the ropes finished and I climbed up a bit more I realised I am in deep shit. I saw a cross on the summit but I knew now was the time to start the descend or maybe I will never come back. Going down was the only solution.

When I finally managed to get off my special ‘rope’ trail I decided it’s time to go home and was kind of disappointed not to reach the summit. Got too stressed and didn’t feel like it though. I went down normal way through Col de Combes (1 668 m) and then down to Estavannens and 4 km later I was back at home. Quite happy to have made it.

Hike lenght:  going up from Broc to Dent the Broc with this trail is about 5 km and 1 100 m altitude change. Going down is longer and much easier.

Difficulty:  It makes you sweat. Some say it’s a T4 and others T5. You have to be fit and motivated, sure footed and not scared of exposition.

It was time for my private revenge with Dent de Broc. This time we chose to start from Vallée du Motélon which you can easily reach with your car. You can either park next to the trail or go a bit more up and leave your car next to restaurant Pinte du Pralet (1 016 m). We left the car next to the trail and started my autumn revenge.

Almost all the way up to Col des Combes (1 668 m) the trail is a road so it’s easy time. It goes up but slowly and it is not steep.

When you reach Col de Combes that’s where it starts going a bit more up. When you’ve reached the sign ‘Dent de Broc’ leave your hiking sticks not far from it, since you will need your hands a lot to help you reach the summit. It’s not climbing and it’s not ‘scary’. For me the last part to reach the cross wasn’t easy (really exposed on both sides) so  I held my boyfriends’ hand and reached the cross (thank you Sam!). I showed my middle finger to Dent de Broc and was happy as never. I did it. Revenge. 1:1 Aggie – Dent de Broc. We’re even now. 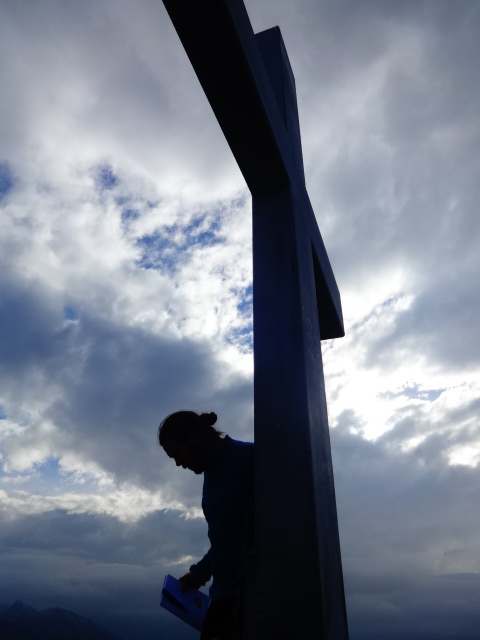 We went down the same way and it was a perfect day.

Difficulty:  it is an easier trail than the first one I wrote about to reach Col des Combes, so you save your energy. Alpine hike to reach the summit is the same.

Tips: Take hiking sticks as I wrote before. Don’t go there alone if you’re not a fan of exposed places.

Gruyère – where the hell is that?